NESARA seems to be trending a big

January 22, 2019
It may just be me, but I'm seeing a bit more of the goofy "NESARA" concept being propagated online. This is an idea that the money system will be converted over to full SPECIE (metal, like gold or silver as the only currency, not Federal Reserve Notes). This also conceives there being an elimination of Federal Income Tax and some other ideas.

This is a real idea, which was promoted by a real person and even got some interest on Capitol Hill, but NEVER. . . I repeat NEVER was even sent into a committee, and of course, was never passed into law. This is NOT LAW.

Here an online anti SCAM site called QUATLOOS (a nice name - means some kind of "money")
talks about this thing, in its more heavily scammy form:

This is an old scam, but seems to be getting ground going among Q anon folk (who justifiably are suspicious of government, but thus may be susceptible to things like this) because this purports to be:

One could almost point out that such attributes are actually RED Flags indicating a potentially BOGUS situation.

If it is "Too Good to be True, then it PROBABLY IS NOT TRUE"

Our world certainly can use reform, but that doesn't mean that the existing state entirely must be destroyed, or that anyone truly plans to do such a thing.

Good idea to get to know "Quatloos" (not NESARA) and bone up on the various scams there, because there are plenty of these things and the next call you get just might be a scammer. I know I get calls like this regularly.

Popular posts from this blog

So I am busying myself with Music and Computing

November 23, 2009
So it is fairly official: I am playing bone as much as is humanly possible, while also training and improving my computing skills (these devices seem to be with us for the long run...). So, it would also make sense for me to post here more often.

I just got off a weekend out of town gig and am back in Van Nuys practicing, taking calls and cleaning up my kit (bones, clothes, mute bag)

Will play a rehearsal tonight and a few this week, though Thanksgiving will interrupt and therefore this week will likely be light.
Read more

August 07, 2008
I'm doing the build of Westernstudioservice.com into a "customer oriented" web site. That means I'm taking the same marketing oriented basic website and changing it into a modern CSS based site with a logon for designated customers (several at first. . .possibly more later) who will be able to access a secure area to see PDF versions of their current inventory as printed by Michael Brittain.

Michael's database is based upon Filemaker, which is currently at version 9. I can see there is a web section to the filemaker product. It is possible I will ultimately have to either migrate the database to a SQL type engine like SQL Server or MySQL and have Michael's database talk to that, or to have the Filemaker work through the net with remote logons managed through the website.

For a first run, I'm interested in getting Filemaker reports available on a logged on basis, then I'll attack the redesign necessary to allow for up-to-the-minute access of a database…
Read more

More and more music ... seems to be a whirlwind 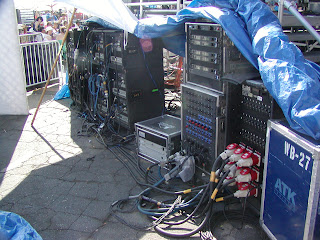 I am now taking everything I can in trombone land. I am trying to get the word out that I am the darndest, super-cool, freelancer trombone player you will ever have in your group...(hear that, contractors?). Have extensive experience in Top 40 band/ R&B...Jazz groups large and small....orchestras...chamber music (e.g. brass quintet) church music, theater work onstage and in the pit, and recordings.

I come in from the Van Nuys area, so I'm centrally located for most LA based work. I also enjoy doing work with many of my longstanding friends from Orange County. So, I really get around this great big city.

PICS COMING!
So I am doing quite a lot of playing. Keeping my Union dues up, too!

[above is the racked equipment used in a festival here in town... also, you can see a big band setting up in Simi Valley, and nearby, and the thing we all like--applause...well, an "…
Read more

Chris Tune
I try to stay ahead of the developments in technology and particularly in finance. I have logged plenty of actual time running General Ledger, producing financials, building accounting systems, and developing tools for finance. Also, I've worked in anti-fraud, and securities industry regulation. I am reasonably well versed in the pit falls of finance. When not working in these areas I'm typically playing trombone in some musical performance.